From the George Washington University School of Public Health.

The April 2011 edition of the journal Health Affairs found that medical errors and other “adverse events” are rampant. This study found that mistakes occur in one out of every three hospital admissions. And these errors didn’t occur in mediocre hospitals, either. The study involved three high-quality teaching hospitals that were not named but were described as having “advanced patient safety programs, initiatives, and research projects.” 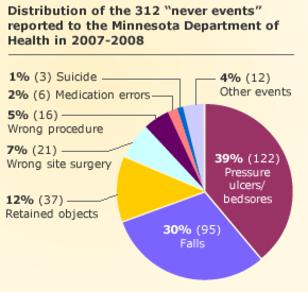 An investigation by the Office of Inspector General, Department of Health and Human Services released January 6, 2012 found that most errors are not reported and even in the case of errors that are reported and investigated changes are seldom made which would prevent them in the future.

Here are the categories under which serious reportable events (SRE) fall according to the National Quality Forum:

Why is such a list important?
It is actually used to command quality from those who deliver healthcare to Americans. For example, Medicare, Medicaid and some private insurers will not reimburse doctors or facilities when one of their patients is a victim of an SRE. The Joint Commission, which is the accreditation body used by most U.S. hospitals, takes reported SREs into account when reviewing the facility for its updated accreditation. According to the NQF, as of 2011, about half of all states use the SRE list to assess the quality of their healthcare facilities, too. Patients benefit in two important ways from the SRE list: We know what medical mistakes and events we need to try to prevent on our own. The list of SREs is a list of unacceptable outcomes, one that helps us determine what preventive measures we need to take and one that outlines which ones might result in a lawsuit. When payers refuse to pay providers for making these mistakes, that puts the pressure on providers to figure out how to avoid adverse events. That can contribute to a safer environment for patients.

> An App is Helping Hospital Patients Protect Themselves  ​

But there are also problems with the list:  As in the past, the current list of never events or serious reportable events does not mention some medical errors that are just as devastating to patients, such as:
– Healthcare-acquired infections
– Missed diagnoses, misdiagnosis or lack of diagnosis
– Lack of follow up – post-hospital discharge or unreported test results that result in harm

If a provider knows they won’t be reimbursed because a serious reportable event took place they may try to cover up the event that does occur. Patients report having suffered these events only to learn later that their records have been amended, actual events have been removed from the records and that their only recourse is to deal with the facility’s risk management department, whose job is to protect the hospital from lawsuits. At that point they have no choice but to contact a lawyer for help.

Other
Failure of communication
Equipment failure
Other system failure

Some examples of preventable medical errors:

Not all harm caused by medical treatment is preventable or avoidable, such as harm that is caused by necessary treatment for which there is a known and quantifiable risk to the patient, even when protocols and guidelines are strictly adhered to. In addition a factor must be included for normal human error. However harm due to human error can largely be eliminated through the proper and effective utilization of controls, such as checklists, that are designed for just such a purpose.